"Since 1928, "Sam", as the cup is popularly known, has been the Holy Grail of GAA football supporters as they pursue their dream of their county becoming All-Ireland championships. Players don't become All-Ireland champions until they've lifted the Sam Maguire, the ultimate symbol of victory and glory in modern Irish sport"
Who is this silent man behind the cup and just how was Maguire a tremendous force on and off the pitch among the Irish immigrant community during a time of republican activism.

Samuel Maguire was born in 1877, in the town land of Mallabraca near the town of Dunmanway in West Cork. He came from a well-respected family who had lived in Mallabraca for the best part of 200 years.  The Maguires farmed a large farm by West  Cork standards.  The farm consisted of the whole town land of about 200 acres (of which only 50 or 60 acres were good, farmland).  They were an honest hard-working family who were very much at one with their Catholic neighbours. They were a Church of Ireland family but mixed with everyone Protestant and Catholic alike.  Though relatively wealthy they were not full of themselves and would go out of their way to help their neighbours no matter what religion.

Sam himself  grew in adulthood to be a tall, slim, broad  shouldered man of a gentle nature. Sam had four brothers and two sisters.  Willie was the eldest then Mary, Jack, Dick, Paul, Sam and Elizabeth.  Willie never married and stayed at home to farm the land.  Mary known locally as Moll also did not marry and stayed at home and so did Elizabeth.  However, Jack and Dick both went to England and worked in London with Sam. Paul on the other hand married a local girl by the name of Hurley from Inchareagh north of the town.  However she was a Catholic and so they emigrated to America.  In the early 1970's their son a Catholic priest visited the old homestead. Sam was educated in the Model School in Dunmanway and afterwards the National School in Ardfield, which Michael Collins later attended.  Here the local School Master Mr. Madden prepared the boys for the British Civil Service examinations. At the age of 20 Sam successfully passed the exams, as he was an excellent, student, and then he got a job in the London Post Office.

The house itself is situated just off the main road to Inchigeela and Macroom, four miles to the north of the town of Dunmanway. The house was derelict without a roof and with crumbling walls. It is surrounded by evergreens mainly spruce and fir planted by the Forestry Department since it took over the surrounding acres.  The valley is surrounded to the west by Nowen Hill, to the south by the Yew Tree Hill and by the Shehy mountains looming to the north. Recently the home place of Sam has been renovated by two local brothers and is open to visitors.

Sam Maguire left for London in 1897, going to work at Mount Pleasant Post Office as there was little or no industrial development in Ireland during this period. This place was also known as “Mount Misery”. Sam joined the Gaelic AthleticAssociation and became a leading figure in the London GAA, both as a player and administrator. In the latter role, he served as chairman of the county board. He played with the Hibernian club in London. Maguire was reported to be a very good player.
​
Sam became a secret member of the IRB (Irish Republican Brotherhood) in 1902, the IRB was a nationalist movement founded in Dublin on St. Patricks Day, 1858. They worked secretly to promote the cause of independence through the G.A.A and the Gaelic League. Its most prominent act was the organisation of the Easter Rising in 1916 and Michael Collins became its leader after 1916. In 1909, he recruited fellow West Cork man Michael Collins. During the War of Independence, Maguire was the leader of the I.R.B in London. He was Collin’s man in London, his I.R.B code name was Tramp. He set up an organisation in the UK post office to read important letters to provide information for Collins and was also involved in smuggling weapons to Ireland. This was very dangerous work but all those involved spoke very highly ofMaguire’s effort.

Most people, who have heard of Sam Maguire did so because they have heard of the Sam Maguire Cup. But who was the  man?  Why does the G.A.A. have a cup named after, him?  This is not just a minor cup but the All Ireland Senior Football Cup. Maguire never won an All-Ireland medal, never was a president of the G.A.A., so why was this most prestigious cup named after Sam Maguire? Well when Sam Maguire went to London to work in the British Civil Service he joined London Hibernians He had never played in Ireland but probably was influenced by the fact that his local team (The Dohenys) at home in  Dunmanway reached the All-Ireland football final in 1897.  At this time the All-Ireland final was contested by the clubs who won their county championships and the London champions got a bye into the finals.  Hence there was a "home final' and an "All-Ireland Final".

From here on the sources differ as to the years Sam Maguire played in the All-Ireland finals. However, G.A-A. records state that it was in 1900, 1901 and in 1903 that he captained the London Hibernians. On the latter two occasions however, many sources state that Maguire also played in 1902. This may be explained by the fact that at the time it was traditional for championships to run well behind schedule so the 1900 Final was actually played on Thursday, October 26, 1902. They played the Clonmel Shamrocks of Tipperary who won 3-7 to 0-2. In the 1901 Final which Maguire captained, they lost to the Isle of the Sea, Dublin 0-14 to 0-2. In 1902 the London Hibernians were again in the Final and again lost to Dublin, but Sam was not playing. In 1903, Sam was captain again. This time their opponents were Tralee Mitchels from Kerry and they again lost 0-11 to 0-3. On all four of these teams there was listed a J. Maguire who most probably was Sam's brother, Jack and as there did not seem to be a captain to the 1902 match presumably Sam must have been injured. This was, by no means, the end of his football career because in June 1906 he again captained the side in the final of the Croke Cup. Some sources claim it was an All-Ireland however, this is untrue as the All-Ireland records do not show this. One source claims he won this match and yet another says he lost it, but it is agreed that it was the last time he played in Jones's Road (Croke Park) and on an Irish pitch. However, some sources claim he then retired but more say that he played and captained the Hibernian team to the London Championship in 1908.​

Sam soon turned his attention to the I.R.B and in November 1909 at Barnsbury Hall Islington, Sam Maguire swore into the I.R.B, he was viewed as a great leader and soon became Lieutenant-General of the I.R.B. and Director of Intelligence in Britain. Sam’s position in the Civil Service gave him access to a lot of important information. His role was varied, and among other things it is believed he helped to smuggle arms and frequently disrupt British daily life. It is reported that there was many a weekend that Sam travelled to Ireland with information which he would dare not put on paper. It is
unclear as to why Sam left London and returned to his homeland, some reports indicate that the British Intelligence were starting to make enquires about him.
While living in Ireland, Sam often attended Croke Park but as his health started to fail him, he spent his remaining time in his home town of Mallabraca. Sam passed away in West Cork in 1927, from TB at the age of 49. After his death some of his friends and the people of Dunmanway thought it appropriate that his memory should be commemorated for both the role he played in G.A.A and in the War of Independence. They decided to present a Cup to the G.A.A in his memory. The Cup was modelled on the Ardagh Chalice and in 1928 Kildare was the first county to win the “Sam Maguire Cup” after defeating Cavan. The Sam Maguire Cup is an ultimate reminder of one man's contribution to Irish GAA and and the extremely important role he played in the I.R.B. and in the War of Independence.

Sam Maguire was laid to rest in St Mary’s Church of Ireland, Dunmanway, and it is at this location where 8 bells known as ‘The Sam Maguire Community Bells’, were installed in his memory. 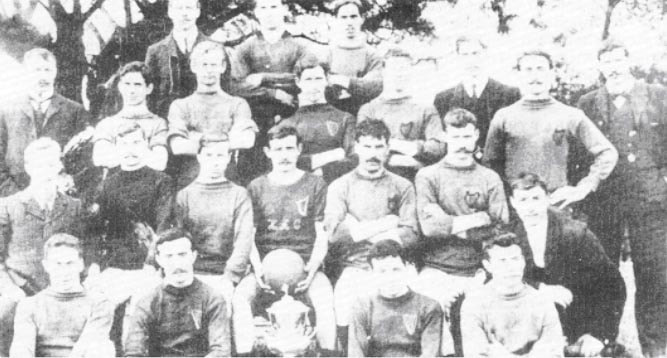 1908 Hibernians Senior Football Team. In the centre with the ball is Sam Maguire, with his brothers Dick and Bill to his left.